Drug testing is the evaluation of a urine, saliva, hair, blood or other type of biological sample to determine if the subject has been using the drug or drugs in question. There are many circumstances that may lead to drug testing:

Drug testing is often done when applying for employment, especially for positions that may involve federal transportation, airline industries, railways, hospitals, and other workplaces where public safety is of the utmost importance. However, workplace drug testing is now common in general for many U.S. employers to lessen the impact from drug abuse, safety concerns, and low productivity in the workplace.

Listed below are the most common drug abbreviations, detection times, and cutoff levels used for point-of-care rapid drug and alcohol screening products. Please note that although most of the abbreviations are universal there are a few that differ slightly depending on the manufacturer of the test device. For example, mAMP=MET, MOP=OPI300 and FEN=FYL. Please contact us if you need clarification on anything or if you need additional cutoff levels that are not listed. 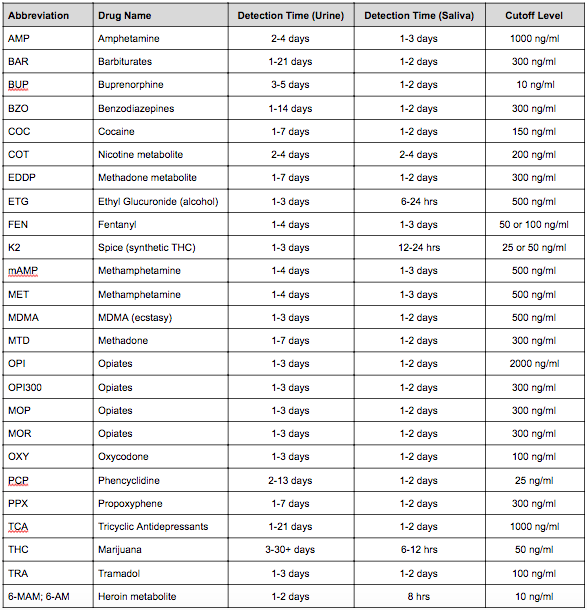 The verb “adulterate” is defined as “rendering something poorer in quality by adding another substance, typically an inferior one.” This activity is illicit where drug testing is concerned, as the process of tampering with a drug test sample can alter the results, rendering them invalid and ineffectual. To reduce or eliminate adulterants in drug testing at your organization, you will need to combat it from both sides: prevention before the fact and detection afterwards. In addition, it never hurts to understand how people try to tamper with drug test results, as their methods can guide your strategies for prevention and detection.